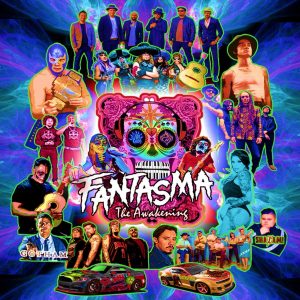 It takes a little Ingeñuity to get a ghost of Mexican heritage to awaken the senses of Latin alternative rock fans — and the savvy marketers that stand to benefit from participating in a new experience set to debut on Día de los Muertos in a city known for sin.

With the right recipe, it is the hope of Ingeñuity, a company led by David Chavez, that “thousands of Latin music and pop culture fans” will gather at the Rio Las Vegas hotel and casino for a Day of the Dead music and Latin culture exhibition taking the name FANTASMA: THE AWAKENING.

The “three-day convergence of pop and Latino culture” is no Woodstock, but perhaps more on track than the Woodstock 50 event, which has experienced a series of setbacks that are poised to make that event the next Fyre Festival.

FANTASMA is planned for November 1-3, and legendary Latino alt-rockers Ozomatli are already on the bill.

“FANTASMA is a culturally driven carnival for your soul – offering a spectrum of see, hear and feel adventure for millennials and generation Xs,” said Chavez, who founded Kansas City-based Ingeñuity in 2015 after an 11-year run as CEO of event marketing firm LatinPointe. From 1992-2004, Chavez was Director of Strategic Relations and Marketing at the National Council of La Raza.

He adds that FANTASMA should be thought of as a “Latino Comicon + National Dia De Los Muertos Celebration + Latin All Genres Music Fest. “There’s nothing else like it in the market,” he said.

With a successful Las Vegas launch, Chavez hopes to bring FANTASMA to other top Hispanic markets across the U.S.

For more, please click here for a short video