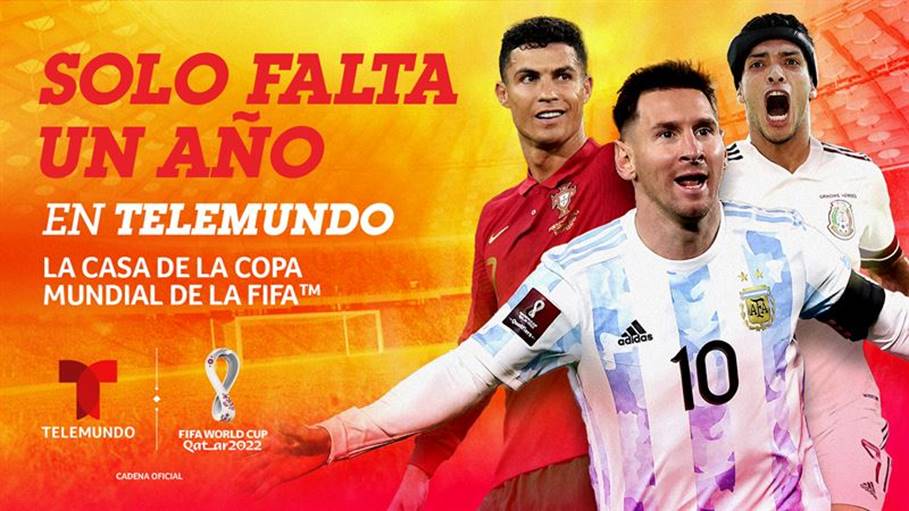 Telemundo kicked off its one-year countdown to the FIFA World Cup Qatar 2022TM, with a preview of its coverage plans as the exclusive Spanish-language home of the largest sporting event in the world. The network is preparing to present the most ambitious multimedia coverage in Spanish-language history, with all 64 matches broadcast live, including 56 games airing on Telemundo and eight on Universo. All games will also be available on live stream with authentication, complemented by the most extensive on-the-ground reporting ever seen.In addition, Telemundo plans to create compelling ancillary content driven by its world-class storytelling and engagement specially tailored for digital and social platforms.

“We are thrilled to kick off the one-year countdown to the FIFA World Cup and give a preview of Telemundo’s plans to bring our viewers the most complete Spanish-language coverage of the biggest sporting event in the world,” said Ray Warren, President of Telemundo Deportes. “Qatar will offer unique opportunities for us to bring home the excitement and drama of the 2022 World Cup to our fans across the country. From its location and the proximity of the venues to the gathering of fans from around the world, we’ll be able to bring viewers the most intimate and engaging experience ever seen across all platforms.”

Telemundo’s production will feature the largest onsite presence ever. For the first time, there will be in-venue presence for all 64 games, leveraging the proximity of the stadiums with commentators calling multiple matches in one day. There will also be more pre-game, halftime, and post-match coverage from onsite studios as well as all positions across the city of Doha. In addition, Telemundo will add more dedicated crews with a special emphasis on the most relevant teams for the U.S. Hispanic audience.

Telemundo’s presentation studio will be located at the center of the cultural Souq Waqif Marketplace featuring multiple backdrop views and content opportunities, not only for the dual view main studio, but also from a compound position overlooking the modern Doha Skyline. There will be additional locations throughout Doha to ensure the most immersive cultural and event experience for the audience.

Soccer Hall of Famer and six-time Emmy award-winner Andres Cantor will return as chief commentator marking his 12th World Cup and his 10th as play-by-play announcer. Coverage will be anchored by Telemundo Deportes’ renowned teams who hosted the World Cup in Russia and Women’s World Cup in France: Miguel Gurwitz, Ana Jurka, Carlos Hermosillo, and Carlota Vizmanos. The team will also be joined by a group of diverse soccer personalities, journalists and commentators with an unmatched depth and breadth of expertise. Telemundo plans to supersize and broaden the scope of on-air talent and experts focus, with a focus on increasing diversity, knowledge, and experiences, while bringing voices to the coverage that represent the most relevant countries participating in the World Cup.

On the advertising sales side, through Telemundo Deportes, NBC Sports and the scale of NBCUniversal’s One Platform, NBCUniversal’s sports properties have the power to reach diverse audiences and sport fans everywhere. The network will utilize that power, including Thanksgiving 2022, when it will air four live matches from Qatar all leading into the Primetime NFL football game that night, delivering an unmatched audience for clients and brands alike. With one year out from the FIFA World Cup Qatar 2022TM, NBCUniversal’s Advertising & Partnerships division has unveiled the three key categories — wireless, retail and auto – that will take over the games, and the company is expecting limited marketing positions to sell out before the traditional Upfront window.

“The marketplace for Hispanic audiences is very strong, and the allure of FIFA World Cup is akin to combining a Super Bowl and Olympics,” said Dan Lovinger, EVP, Advertising & Partnerships, NBC Sports Group. “Sports in general, and the FIFA World Cup especially, have the rare ability to deliver massive scale across all platforms. Consequently, we’re seeing marketers excited to get on board earlier than they normally would, and we are pacing well ahead of the 2018 FIFA World Cup one year out.”

As part of the marketing efforts, Telemundo will leverage NBC Universal’s unmatched portfolio of assets to connect with World Cup fans and generate awareness and excitement around the one-year countdown to the tournament. The promotional efforts will be led by a campaign, set to debut tonight during Telemundo’s broadcast of the CONCACAF World Cup Qualifying Canada vs. Mexico. The spot showcases how the World Cup is only a year away from the biggest and most exciting tournament on the planet, anchored on a theme around the “heat” of the game, the players and the fans for this unique World Cup in Qatar.