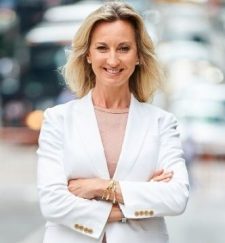 Six days after Isaac Lee resigned as Chief Content Officer of Univision Communications, the company’s Chief Revenue Officer “has decided to step down.”

In an announcement distributed after 4:30pm Pacific on Monday (7/23), Univision’s New York business office confirmed the departure of Tonia O’Connor after 10 1/2 years of service with the Hispanic media company.

Univision, in a statement, noted that O’Connor played “a key role” in the company’s expansion from three networks to 17 broadcast, cable and digital networks. Unfortunately, Univision has largely failed to keep up with the rapidly changing viewer habits and interests of today’s Hispanic market, losing audience share to NBCUniversal Hispanic Enterprises’ Telemundo and big properties — namely the FIFA World Cup.

These declines have put extreme pressure on Univision to produce, and the exits O’Connor — like Lee — may be viewed by some as collateral for its steady decline and lack of scalability with English-preferred Latino consumers.

In a telling sign, it was Univision’s Board of Directors that collectively offered a comment about O’Connor’s decision to leave Univision.

“For more than a decade, Tonia O’Connor has been a key figure in transforming Univision from a niche media asset into a major player in the U.S. media landscape. We greatly appreciate her leadership and the important role she played in driving the company’s growth, negotiating complex transactions and developing new revenue streams. We thank her and wish her well and continued success in her new endeavors.”

O’Connor added,  “I am incredibly proud of helping transform Univision into a media powerhouse. I will always treasure my experience and colleagues from Univision, which I will carry with me as I take on new challenges and continue to make an impact.”

O’Connor joined Univision in January 2008 as Chief Commercial Officer and President of Content Distribution. She was promoted in July 2017. Before taking the role at Univision, O’Connor spent 13 years at Gemstar-TV Guide, serving as EVP/Distribution.

Her first career role was as an outside mobile sales representative for Bell South, from 1991-1993, following her graduation from Syracuse University.