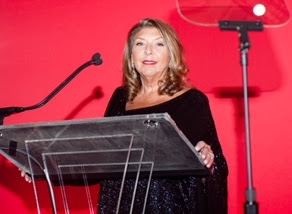 Daisy Expósito-Ulla, Chairman/CEO of d expósito & Partners, was inducted into the 69th Annual Advertising Hall of Fame at a Gala Dinner and Induction Ceremony on Tuesday (4/24) at Cipriani Wall Street in New York.

The AAF Hall of Fame is the highest honor bestowed by America’s Advertising Industry and it recognizes the most accomplished and legendary figures in advertising.

During the ceremony, a highlight video presented the achievements of Daisy, a pioneer and a recognized authority in multicultural marketing and brand communications. (view the career highlight video at https://vimeo.com/266304540/9ed990a5e5 )

Besides having received numerous industry and creative awards (Clio, Effie, Addy, ADCOLOR Lifetime Achievement Award among others), she is consistently acknowledged as one of the Most Influential Latinos in the U.S.A. Her participation on boards includes the Ad Council, the AEF, and the 4A’s Foundation and she is a founding member of AHAA (The Association of Hispanic Ad Agencies) now known as Culture Marketing Council and served as its president.

Among her enormous contributions to the betterment of society outside her professional career, she has worked tirelessly to support the people and causes she cares deeply about.

At the gala ceremony dinner, she also accepted the David Bell Award for Industry Service, awarded to recognize extraordinary and unique contributions and service to the advertising community and industry as a whole. The award is named in honor of David Bell (Hall of Fame Class of 2007), a visionary leader and mentor to several generations of advertising professionals.

Daisy has been widely recognized as a pivotal architect of the Hispanic Market in the United States. Her pioneering efforts for the industry started at an early age when the market was significantly smaller from what it is today.

“I’m so honored to be included among this distinguished group inducted into the AAF Hall of Fame,” she said. “This is indeed the highest honor I have ever received in my 40-year career. I share it with my partners, team and family who have always supported me and helped make the achievements possible.”

Daisy concluded her acceptance speech by remarking, “I’ll say this: I am an immigrant. I am a product of Brand America. And so, I would be remiss if I were to accept this induction at this time in our history without emphasizing the importance of keeping the spirit of this generous country alive.”