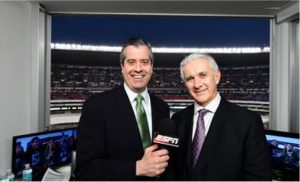 The National Football League and CBS have reached an agreement with ESPN Deportes to televise Super Bowl LIII in Spanish.

“As the broadcaster of Super Bowl LIII, it was important for us to find a Spanish-language partner to reach the NFL’s Hispanic fan base on the biggest day in television,” said CBS Sports EVP/Programming Dan Weinberg. “The presentation on ESPN will be a great complement to our broadcast on CBS.”

ESPN Deportes VP/GM Freddy Rolón added, “The Super Bowl is one of the biggest and most anticipated sporting events of the year and we are proud to serve as the Spanish-language media partner thanks to this agreement with the NFL and CBS.  Carrying Super Bowl LIII will be the perfect way for us to cap the NFL season, which will also include our presentation of the Mexico City MNF game and our plans to provide an ESPN2 MNF Spanish-language simulcast during the first nine weeks of the season.”

What about ESPN Deportes Radio? It’s in the game — and will broadcast the Super Bowl for the fourth consecutive year as part of a separate agreement with the NFL.