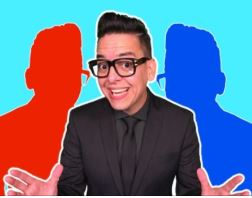 A 12 1/2 year Univision Radio veteran who has programmed Spanish Top 40 WRTO-FM “Mix 98” in Miami and Tropical WXNY-FM “X96.3” in New York has just teamed up with Enrique Santos and the iHeartMedia Latino operation by accepting the role of Program Director for one of its biggest Spanish-language radio stations.

Walo Dávila will take over the programming reins for WZTU-FM “Tú 94.9” in Miami, starting July 9.

He’ll work with the on-air personalities and sales team while overseeing the music programming and broadcast and digital operations of the Spanish Hot Adult Contemporary station, which is the flagship station of the Enrique Santos Show — hosted by the iHeartLatino Chairman and Chief Creative Officer.

Santos is a former Univision Radio talent, and Dávila worked with Santos at Mix 98.

Davila’s resume includes a role as a talk host for WKAQ-AM 580 in San Juan, a radio station that proved to be a vital lifeline for Puerto Ricans impacted by Hurricane Maria in fall 2017.

Before joining Univision Radio, Davila was at Spanish Broadcasting System (SBS) in Puerto Rico, holding the role of General Producer across the company’s stations — including Z93, Estereotempo, La Mega and the former Onda 94.

He started his career in radio in 1995 at WKVM-AM in Puerto Rico, as a co-host and producer of the “Horizontes” talk program.

“We are thrilled to welcome Walo to our team,” said Alex Tear, Regional SVP/Programming for iHeart in Miami. “His experience, creative energy, leadership and vast market knowledge will take iHeartMedia Miami’s TÚ 94.9 to even higher levels.”

While Santos’ nationally syndicated morning show is based at WZTU, in addition to his English-language Premiere syndicated CHR program On The Move, he was not Tú PD.

Those duties were most recently held by José Otero, Tear confirms to Hispanic Market Overview.

José (Gonzo) Otero was national Hispanic brand manager and PD of WZTU. He was born in San Diego, and started his radio career in 1998 in Tijuana, on air and in the creative department. He joined Univision Radio in 2004 and later worked at MVS Radio and Grupo Uniradio. He came to iHeartMedia in 2009 and has served as an air personality, PD, digital brand coordinator, operations manager, and national Hispanic brand manager, as well as supervised and developed multiple brands in Chicago, Fresno, and most recently Miami.

Otero was instrumental in branding the iHeartRadio app to the Hispanic community nationally, working closely with local and national sales teams, and has produced iHeartMedia’s international tentpole event Fiesta Latina since 2014.

Otero had recently moved to Miami to program TU 94.9 and work with the recently created iHeartLatino platform alongside Enrique Santos.

WZTU programming duties in the recent past had also been held by P.J. Gonzalez, serving in the greater role of SVP/Programming for iHeartLatino.