With that, Wade Davis succeeded Vince Sadusky as Univision’s CEO.

Then came major changes to the C-Suite, as reported by Radio & Television Business Report.

Now, it is known that the broom brought by Davis has impacted Univision’s flagship TV station in Miami, as one of its most familiar faces is now a former news anchor.

As first reported by RBR+TVBR, Steve Mandala, who had been President of Advertising Sales and Marketing at the Doral, Fla.-based multimedia company serving Hispanic consumers since July 2017 and spent nearly 8 1/2 years in his second stint at Univision, is out.

His successor: Donna Speciale. Speciale in July 2019 departed as President of Ad Sales for WarnerMedia’s cable television brands — TNT, TBS, TRU, Adult Swim, Cartoon Network and CNN. It was a role she held from March 2012, when she joined WarnerMedia after enjoying a lengthy career in media buying.

Additionally, former Telemundo Networks President Luis Silberwasser has been named to the newly created role of President of the Univision Television Networks Group and will lead Univision’s national TV properties.

And, Pierluigi Gazzolo has been appointed to the newly created role of President of Univision Communications. He’ll also serve as Chief Transformation Officer to drive the next era of growth.

Further, Chief Legal and Corporate Affairs Officer Jonathan Schwartz has agreed to serve in a transitional role as a senior advisor to Univision.

While those announcements reverberated nationally, Miami media was focused on the departure of Alina Mayo Azze from WLTV-23’s news operations. 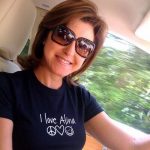 Azze was a fixture at “Univision 23,” a Cuban-American raised in Puerto Rico who spent more than 35 years at the station. However, signs of a refresh came for WLTV five years ago, when Azze was succeeded at 11pm by Gloria Ordaz in a move designed to stem a wave of viewers from shifting to Telemundo rival WSCV-51. Officially, Univision explained that Azze negotiated a new contract that allowed for more time spent with her family; Azze today is a grandmother.

Azze remained the main anchor at 6pm for Univision 23. Now, with the change in majority ownership and C-Suite moves, she’s no longer in that role and gone from WLTV.

An official announcement was due January 13, during the 6pm broadcast she’d been co-anchoring for 30 years — many of them alongside the late Guillermo Benites. Together, Univision 23 commanded the lion’s share of viewers across the 1990s and early 2000s. In recent years, competitors WSCV and smaller nibblers including Spanish Broadcasting System’s Mega TV, América TeVe and Estrella TV’s WGEN-8, slowly eroded WLTV’s dominance.

Azze began her career 40 years ago as a WLTV reporter, when the station was part of the “SIN” predecessor network to Univision. She worked at WSCV for two years in the 1980s, too.

In a statement provided to Los Angeles’ Spanish-language daily newspaper La Opinión, Univision said it announced on Tuesday “some important change to the company’s structure.”

In Univision’s view, “the changes reflect a reorganization in the way that we work, and in some cases, we have to say farewell to some co-workers. These are difficult but necessary decisions for our business as we transform to position Univision for its next birth phase. We remain dedicated to informing, entertaining and empowering the Hispanic community.”

Also confirmed to have exited Univision is Houston-based radio host Renzo Heredia, who was associated with “Amor 106.5.”