If you believe AHAA, the Hispanic market is on fire.

Total U.S. Hispanic advertising dollars from Consumer Packaged Goods (CPG) companies and retailers in 2014 were $2 billion–up from $1.2 billion in 2010.

That’s a meteoric rise from the 5.4% seen in 2008, according to data shared Tuesday in an online presentation from Santiago Solutions Group Chief Strategist Carlos Santiago, who serves as chair of the AHAA research committee.

The CPG/retailer numbers are just the tip of the iceberg: A look at the top 500 advertisers allocating dollars to the U.S. Hispanic market provides some highly positive news. Every company spending dollars on Hispanic creative (for all categories — not just CPG/retailers) is largely responsible for the jump in dollars allocated to Hispanic media. 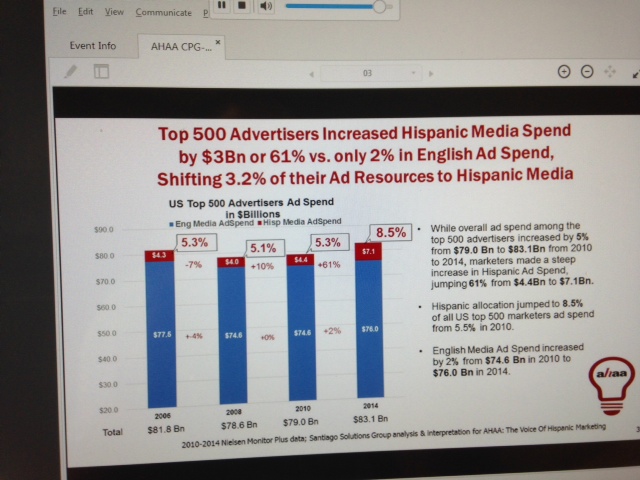 And while Hispanic advertising agency veteran Antonio Ruiz should be jumping for joy, his elation may be tempered. Ruiz in September 2011 infamously attacked statistics showing that the U.S. Hispanic market attracted 4.5% of all ad dollars — something he called “disgusting.”

Additionally, market observers indicate to the Adam R Jacobson Consultancy that the first half of 2015 was slow, and that the second half of 2015 will eventually pick up but perhaps not until Q4 and into 2016.

Furthermore, 2014 was likely significantly impacted by the FIFA World Cup and an inflow of political dollars. When subtracting these dollars, thus looking at Like-to-Like comparisons, was the Hispanic market really flat–thus accounting for the seemingly soft start to 2015? 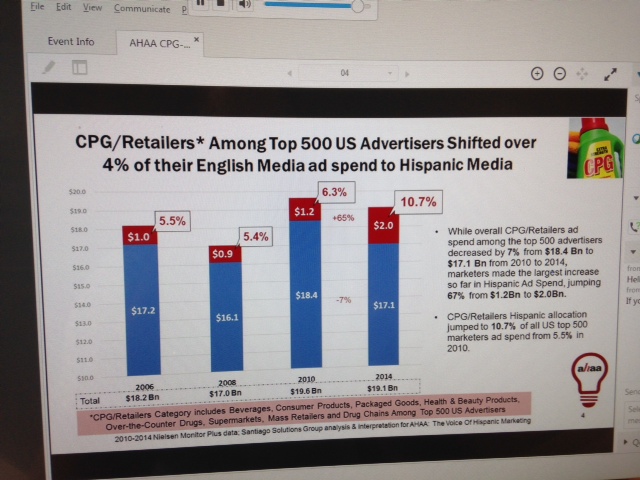 With all of the discussion on “total market dollars” and its high relevance to marketers and media buyers seeking to reach all Hispanics, the picture of the state of U.S. Hispanic marketing and advertising may be murkier than what Santiago suggests. Programmatic may also be impacting overall ad dollars, with “premium” real-time buying driving up rates for internet and digital media but attracting dollars away from pricier traditional media opportunities.

Thus, dollars are shuffling — and the overall state of advertising is still highly questionable.

Still, Santiago believes there is a direct and positive relationship between 2014 CPG/retailers share of ad spend dedicated to Hispanic media and their topline revenue growth. 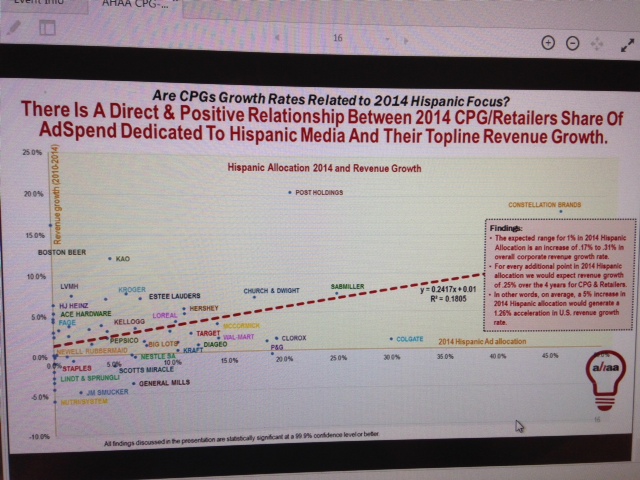 With the top 500 companies in the driver’s seat, it remains to be seen if they will continue to set the pace for not only U.S. Hispanic ad dollars but total market budgets as well. As digital grows and the prevalence of English as a preferred media language increases among U.S. Hispanics, even with the highly anticipated Initial Public Offering of Univision stock, questions will remain for the long-term health and stability of the U.S. Hispanic advertising and marketing world.