I’ve not taken to blogging much as of late. However, I was moved to provide the advertising world with a first-hand account of an experiential marketing effort currently underway in Miami’s Wynwood Art District that takes social media to the streets of the city’s hippest neighborhood in an effort to shatter stereotypes and connect an automotive brand to an upscale, hip — and Millennial-driven — consumer group.

My father received last week an invitation from Lincoln Motor Company to participate in its “Hello, Again” Tour — a one-hour experience that allows locals to “rediscover” Wynwood … from the driver’s seat of a 2013 Lincoln MKZ. He passed along the invitation to me.

I wasn’t sure what to expect. In the past, such events have put the focus on the car while using hip locales or “tours” as an excuse to draw people to a hard sell on a vehicle they may know little about and may have no desire to purchase within the next six months. This experience was the exact opposite.

Upon arrival at SoHo Studios Pavilion, I was greeted by a young Lincoln representative from Silicon Valley who chatted about life in Miami compared to California and then offered me an iced coffee courtesy of local retailer Panther Coffee.

He then politely invited me to look around the studio, which had a fully loaded MKZ prominently displayed yet was nevertheless meshed into museumesque presentations on Panther Coffee, Wynwood Cigar Company (a highlight of our tour), and a local restauranteur known for his culinary delights at Coral Gables’ La Cofradia who is opening a restaurant in Wynwood soon.

I was not handed a sleek brochure with pics of the MKZ and specs. I was not pressured into completing a potential buyers’ survey.

After 10 minutes, a couple of under-40 women arrived, in addition to a 20-something woman with flaming auburn hair and her Latino boyfriend. Our Lincoln representative then invited us to select from one of four MKZs, get behind the wheel, and begin our tour. Walkie-talkies in each car directed us to various street murals, a drive-through art exhibit, and the Wynwood Cigar Factory, where I actually got to roll a cigar. Clearly, Lincoln was taking a very subtle approach to marketing its car.

A few minutes later we were again on our way. As we returned to our vehicles, the Lincoln rep pointed out one mural that was “completed” by having an MKZ parked right in front of it. OK, there’s the marketing pitch … but then we drove off and continued our driving tour.

We drove back to the Pavilion and concluded our tour with another individual from Lincoln available to answer any questions we had about the MKZ. We were not given a presentation — again, it was consumer-driven, and put the individual in control of how much or how little they wanted to learn about Lincoln Motor Company and the fully loaded sedan we’d spent the last hour in.

Truth be told, it worked.

I was the one to make the most comments, and ask the most questions. I marveled over the AC coming up from below the seat cushion — an odd feeling at first as cool air blew up to my rump. I spent a few minutes trying to navigate the push button media center that included Sirius Satellite Radio and the ability to connect a smartphone or MP3 player via USB port or Bluetooth. I couldn’t figure out how to use the HD Radio tuner; in the 3-series BMW it’s pretty easy to go to KROQ-HD2 to pull up the Roq of the ’80s channel when in L.A.

I requested a brochure, which is standard at all of the L.A. Auto Shows and Miami Auto Shows I’ve attended in the last decade or so. No luck: To promote its Green efforts that include the use of a soy substance in creating its leather seating (not clear what this was when it was explained to me), Lincoln wasn’t handing out anything. Again, the automaker wanted us to have a nice leisurely experience in Wynwood. Period. If we wanted to learn more about Lincoln, we could request it.

A young woman representing Lincoln then gave the attendees an iPad open to a survey that asked some basic questions about our experience driving a Lincoln: Would we be in the market for a new automobile within the next year? What was our opinion of the car? What was our opinion of Lincoln? Would we recommend Lincoln? Did we want information emailed to us about the MKZ or other Lincoln models?

And that was pretty much it, except for our thank-you gift: a 1/2 pound of Brazilian coffee from Panther Coffee or a box of hand-rolled cigars from Wynwood Cigar Factory (I opted for the coffee). 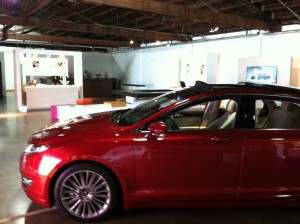 In a world  where social media is now a major part of a marketer’s outreach efforts, Lincoln succeeded in bringing its Facebook and Twitter-based interactivity with consumers to the streets. It was a great example of Experiential 2.0 — taking the auto show experience, marrying it with the street fair (think Calle Ocho, Fiesta Broadway or the successful fan festivals that Soccer United Marketing puts on prior to its international soccer friendlies), and then deconstructing it so that the brand is not so much the protagonist but never leaves the stage.

Will I purchase a Lincoln MKZ now that I’ve spent an hour driving one? That’s not the point. The point is Lincoln connected with me in a way that could never have been done in an auto show, or street fair, or automotive dealer.

This is also notable for its success in attracting the Millennial — the consumer group that marketers are gushing over, especially in the Hispanic world. If anyone still associates Lincoln with its 1970s-style Continentals and retirees in Palm Beach County who enjoy golf and delicatessens, they’re very much out of touch with where the brand sits today. The Lincoln Navigator is a premium choice among moms; now the MKZ seeks to be the premium choice for the 3-series BMW consumer.

Finally, the decision by Lincoln Motor Company to bring its “Hello, Again Tour” to a hub of bilingual, bicultural Hispanic Millennials is noteworthy in and of itself. Lincoln may wish to follow up its tour with marketing efforts that use digital, social and mobile media targeting Hispanic Millennials, in addition to traditional media such as television, radio, and out-of-home. The results could prove highly beneficial for a brand that is not only reinventing itself, but how to reach its next generation of automobile buyers.