Leo Burnett CCO: “We’re All ‘Under The Influence’ Of Creativity”

The 2013 ahaa annual conference concluded Wednesday afternoon in Miami Beach, Fla. with a resonating presentation from Leo Burnett Worldwide Chief Creative Officer Mark Tutssel, who singled out the Latin world for its “great love of creativity.” However, his presentation focused on the notion that the “tectonic plates of global marketing” are continually changing, thus putting marketers in a continuous battle to gain people’s attention.

Additionally, digital and social media has shattered the paradigm for traditional advertising campaigns. “Creativity without borders will set the benchmark for creative communications,” said Tutssel, who has four core roles that set the stage for borderless creativity.

The first rule, “Cultural Fluidity,” is based on his belief that advertisers and marketers are in constant competition for people’s attention. And with every single piece of work now shared around the world, the people are now empowered to influence and direct a brand’s message.

Tutssel’s second rule, “Democratization of Creativity,” revolves around his understanding that the production and distribution channels have been turned over to the masses. “What does that mean for us?” he asks, referring to the advertising agency. “It means we have competition not just from other advertising agencies—it is all of humanity.” Thus, Tutssel opines, creative needs to allow for participation from the consumer, allowing them to reimagine and repurpose traditional creative.

Being “Always On” is Tutssel’s third rule, remarkining that he couldn’t remember the last time he turned off his smartphone. Lastly, Tutssel said global collaboration—the industry’s “true north,” was essential for assuring that the brand’s creative speak exactly the same language, no matter its interpretation. “The industry’s future is discovery and curiosity,” Tutssel concluded. “Our world is a blank canvass.”

Tutssel’s concluding remarks followed a presentation featuring Walmart VP/Creative Marketing Greg Warren and SVP/Brand Marketing and Advertising that had the two executives present via video conference from an Admirals’ Club at O’Hare International Airport in Chicago, where the two were stuck due to cancelled flights and virtually accepted the honor of ahaa’s Marketer of the Year. Walmart’s extensive efforts to reach Hispanics were placed in the spotlight, including its “Operacion Parillada” television campaign designed to promote its steaks to Latino consumers. 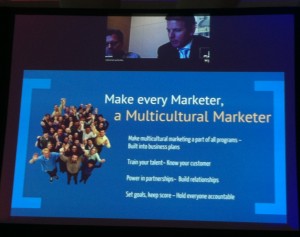